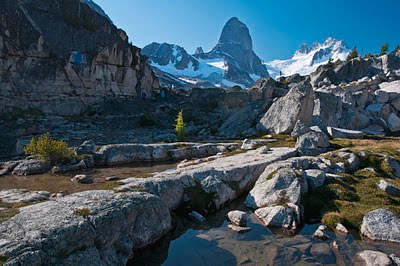 Photo of Tamarak Glen in the Bugaboos.

The weather gods smiled on us this year for our 2nd heli-painting trip into the Bugaboo mountains of British Columbia. We had 3 days of bluebird skies- spectacular! Tamarak Glen is an especially powerful location with so many compositions it's a challenge to narrow it down - the requests rolled in for more time here next year.

For those of you wondering how this kind of a trip works - here's the goods:

The accommodation is a gorgeous lodge in the most unlikely backcountry wilderness with private rooms, queen size beds and feather duvets. The cuisine is 5 star, and all the painters gather for dinner each night to share and relive the day's adventures. The lodge also has a hot tub on the roof, so often the conversation continues while floating around under a starlit sky. This year there were stars, a full moon and Northern Lights - pretty nearly perfect. 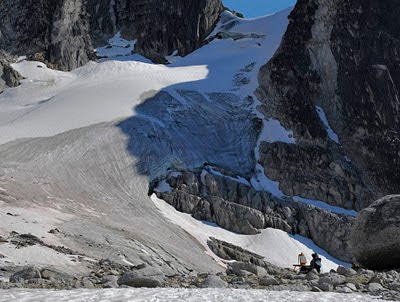 Each day we fly by helicopter to one or two magnificent locations, and once we have been deposited and the heli has left, the painting begins. Robert and I do demos and lots of circulating and giving feedback and pointers, but the priority is painting time for the artists, and often we all just paint together as a group. 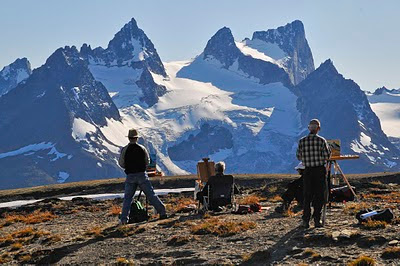 There are two things I've noticed each year we have immersed ourselves in this truly unique environment to paint - the artists improve in leaps and bounds, and a wonderful bond forms between the group that is fostered by engaging in a shared experience filled with camaraderie, challenge and heart-stoppingly beautiful inspiration. 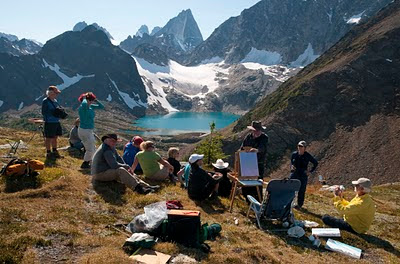 Robert about to demo on Black Forest Ridge

Each painter develops a whole lot of work, anywhere from 5-15 studies each, and on the last night we gather them all together for review and critique. It is truly moving to see well over 100 paintings created in 3 days by one group of artists. So cool to observe the incredibly varied ways of seeing the same landscape, and each person's clear progress from beginning to end as they find their feet and became more deeply connected with the environment. 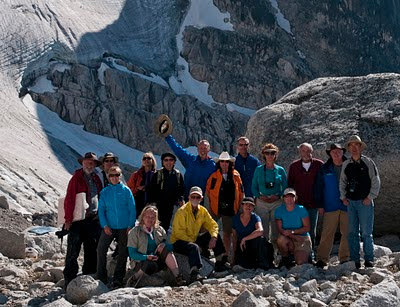 Heli-painting is a truly extraordinary adventure. If you'd like to join us next year, more details can be found here.

Please log on to my Flickr link if you want to see more photos from this year's trip. (Make sure you click on slideshow view to see the best quality images.)

Paintings from the trip coming soon!
Posted by liz wiltzen at 7:34 PM 4 comments:

The #1 Reason to Enter Juried Shows 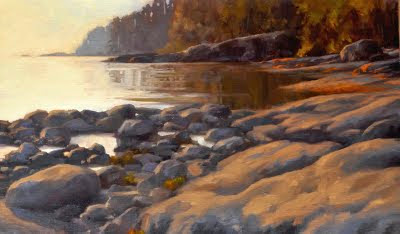 I recently read an article titled: Awards and Ribbons - Who Really Cares? While the author, Jack White, makes some valid points about cost vs. financial payback, and the potential for misguided egoic motivation in this pursuit -  I believe a very important payoff is missing from his argument.

If you don't read his entire article (though I think you should) - it makes the point: "All the juried ribbons and plastic trophies will not help you generate any real sales or give you fame. What do you want to do, win ribbons or earn money?"

These are two options available to us. I would like to add: What if your goal is to become the best artist you can in this lifetime?

Raising the Bar
Is there space for more than simply winning awards or selling paintings? I believe some of us go after the awards not because we think the awards will sell our art, but because of what happens to our art in pursuit of them.

If you want to play in the big leagues you have to hone your skills to a big league level. There is a vast difference between assessing your painting from the perspective, "Is it saleable?", and a perspective that asks, "Could it hold it's own beside the high caliber painters that will likely be entering this show?"

If your primary focus is making money, this might feel like the long way around. Perhaps unnecessary. Perhaps even a recipe for disappointment and dissatisfaction.

If your primary focus is mastery, I propose there's enormous value to be had here, despite the sometimes frustratingly high costs associated with it. As for the sting of rejection, put your game face on - stiff competition is the point.

Determined Practice
Ultimately it comes down to what Daniel Coyle, author of The Talent Code, calls 'determined practice'. You will get somewhat better putting 10,000 hours of brush time behind you.

You will achieve excellence and rise to the top of your game if the 10.000 hours includes consistently focusing on your weaknesses with the intent to replace them with both skillful handling of your chosen medium, and mastery of the underlying principles of painting in general.

I believe in the end this choice will lead you to both extraordinary satisfaction with your art, and the financial compensation that it deserves. (Patience and faith required.) 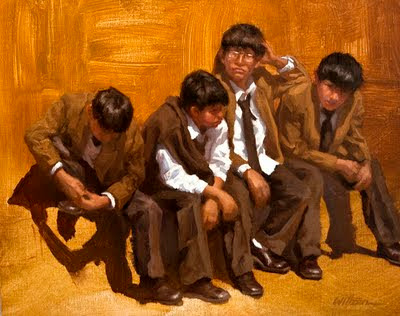 "Denman Island", featured at the top of the this post, was recently juried into the 2nd Annual AIRS show hosted by the Federation of Canadian Artists in Vancouver this October.

"Los Cuatro Amigos" has just been juried into the Oil Painters of America 2011 Regional Exhibition . (Some of you may recall that this painting also won Best of Show this March in the Raymar Fine Art Competition.)

I love that these paintings got accepted - and - both of them were declined from the first shows I entered them in. When a painting is rejected, I do my best to take an even harder critical look at it, and if it still feels like one of my better works, I send it back out there for another lap in front of the judges.  If you know in your heart your piece has merit, it's worth trying a few shows before retiring it from the competition circuit, while working in the background to create paintings that soar even higher!
Posted by liz wiltzen at 7:04 PM 12 comments:

Top 5 Reasons You Won't Get into Juried Shows 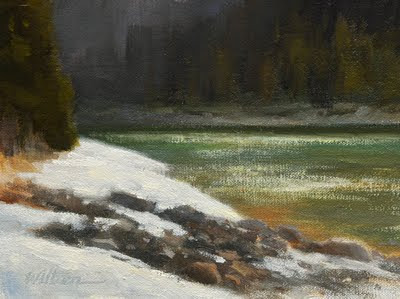 Daily Paintworks is currently hosting a "Help the Children of Africa" Challenge where several artists have posted paintings for sale by auction and agreed to donate all proceeds to this very worthy cause. The painting above is included in the auction, and whatever $ it raises will be matched dollar for dollar by the Canadian government. Yay! Head on over and check out the auctions!

The 5 reasons listed below are not the only ones, but they're among the most common. None of them are a reason to stop entering, and only one has to do with quality. Let's start there:

1) Your work isn't good enough (yet)
Painting is easy. Painting well is not. It requires years of dedicated practice to execute work that is strong on every level. Keep working.

2) The jurors don't like it (not the same as #1)
When I jury for a show, I find there are times when I am inclined to overlook technical shortcomings if the piece has strong emotional impact. I have worked with jurors who feel the exact opposite. And there are as many different ideas about what each of these things are as there are humans on the planet. Add to that maybe the juror was stalked by a psycho ballerina and is no way ever going to let a ballet inspired piece into a show. (Could happen.) Jurying is subjective. No way it can't be. Keep working.

3) Your style isn't the right fit for the show
Abstract work doesn't fit in a traditional show and vice versa. Good to view past years of the show you want to enter and ensure your work is a fit.

4) The field of submissions is large and good
Take the Oil Painters of America National Show. They regularly receive over 2500 entries from some of the top painters in North America, and usually accept about 250 pieces. In the 90% of declined entries, there simply have to be some outstanding paintings. What does that mean if your work gets declined? You're in some very good company. Keep working.

5) They've already filled the quota for your genre
Ok this one is speculation - but If your piece is so drop dead gorgeous that it stops everyone in their tracks, it's irrelevant anyway. Go do that!

Now that we've jumped in - stay tuned for my next post - "The #1 Reason to Enter Juried Shows".