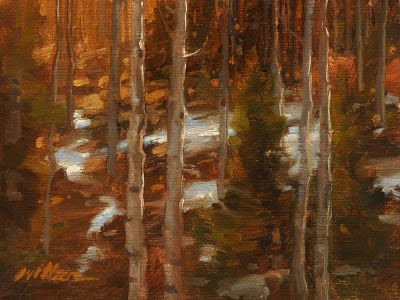 About 3 weeks ago, a couple of artist friends and I decided to go paint plein air. In February. In the mountains. Why? Can't really answer that. Seemed like a good idea at the time. Until we were standing in the forest, 30 minutes into our paintings, FREEEEEZING! I mean feet numb, hands not working, yup, pretty much freezing. Here is a photo of us, but don't let it fool you, we were not having fun: 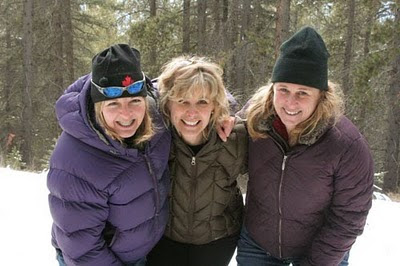 Okay, we were having a pretty good laugh that we were looking for something to set the camera on to take a self-timer picture when Gaye (the least blond one) realized we had 3 plein air boxes mounted on -yes - tripods, right there with us.

Anyway, a wiper that day.

The very next day, Gaye and I headed out once more. Did I mention it was February in the mountains? Yup, froze again, but we did stay out for two paintings worth of punishment. Both wipers.

Fast forward to last week. I headed out again, but now it's March in the mountains. Gaye has gone back home to BC, smart woman. I did ask Sarah to join me. She declined. Not sure why.

It was warmer for sure, and I did two paintings, one REALLY bad, and one not so bad, a keeper. Buoyed on by this, I went back out again the next day for one more kick at the can and painted "Spring Outing". Not a wiper, maybe even some potential to do a bigger studio piece from after some compositional tweaking. Just in the nick of time, because the next day it snowed 20 cms, and the temperature dropped 15 degrees. No more plein air for a while.

Get out there and paint. Lots of bad ones. Figure out why they're bad. Try not to do that again. Go out some more. Have a strategy. Try and stick to it. If it's not working, abandon it. New strategy - try again.

When it's over, know that a day out painting is worth a week of painting inside (from photos) for skill building, even though you may not be sure why at the time. There's powerful stuff going into the cells, magical stuff that will show up in a painting 6 months from now out of the seemingly clear blue sky. It was those days you froze and painted all those really crappy paintings, it was what you learned then. You just didn't know it at the time.
Posted by liz wiltzen at 7:26 PM