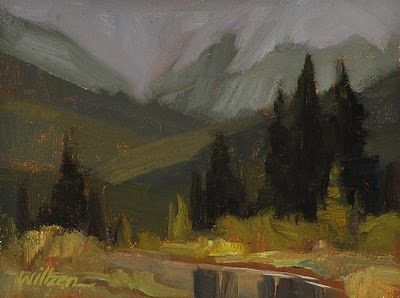 10/06/04 (2pm)
I wanted to post these three together because they were painted on the same day. I was painting with an artist I have bumped into several times over the painting years - Sharon Williams, as well as my good friend Conrad Habing and a new friend, Bobbi Dunlop. Good thing the company was great because the light was uninspiring to say the least. For the first one I was determined to do a 15 minute study. It took 20 mins., but I count that as a win. The goal was to capture the colour, value and rhythm that were present without thinking about it too much. It's wild to paint this fast, feels like you're flying by the seat of your pants every single brush stroke, but it sure forces you to make decisions intuitively. 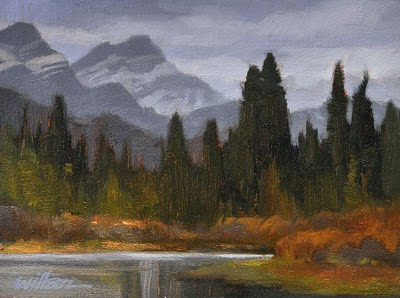 10/06/04 (3pm)
Loved the first challenge, it was so fun I vowed I would do the same speed painting exercise every painting for the rest of the day, and proceeded to spend an hour on this one, and an hour and a half on the 3rd. Change does not come easily... 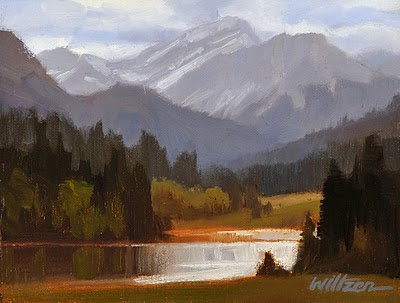 10/06/04 (8pm)
These women are painting maniacs, we started our last painting at 8pm after driving around for about 45 minutes scouting things out. Sharon found this magical little spot and the light got interesting for a brief time just as we were setting up. I was really striving to push things back on this one. The middle ground trees were much darker in reality but I wanted to see how much depth I could create using value and colour temperature changes.
Posted by liz wiltzen at 12:51 AM